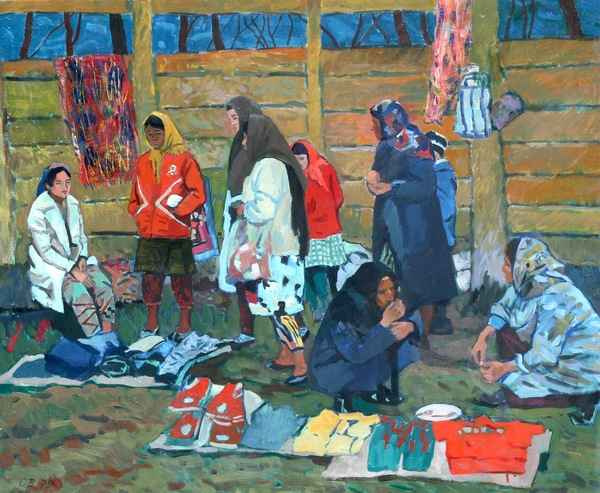 Oleg Borisovich Vasilyev was born in 1918 in Ufa (Bashkortostan, Russia). His family moved to Kiev and he was a student at the Kiev State Art Institute until his studies were interrupted by the war. Upon his return, he continued to pursue his studies and artistic career. Vasilyev became a renowned artist and participated in many exhibitions in the USSR and abroad. His paintings were exhibited in Cuba, Poland, Finland, Germany, Hungary, Bulgaria, Italy, Yugoslavia, Holland, Pakistan, Sri Lanka.

The main genres in Vasilyev's artworks are landscapes and thematic paintings. Vasilyev drew inspiration from his multiple trips all across the Soviet Union – Karelia, Russia, Ukraine, Caucasus, Central Asia. Vasilyev's paintings are represened at the National Art Museums of Ukraine, Donetsk, Lugansk, Nikolaev, Kharkov, Sumy and Chernigov, also in private collections in Ukraine and abroad.

Bazar in Kultuk (Uzbekistan)
Go back to the Artists
ArtMonasch.com © 2021 - Powered by: SVD Productions - -